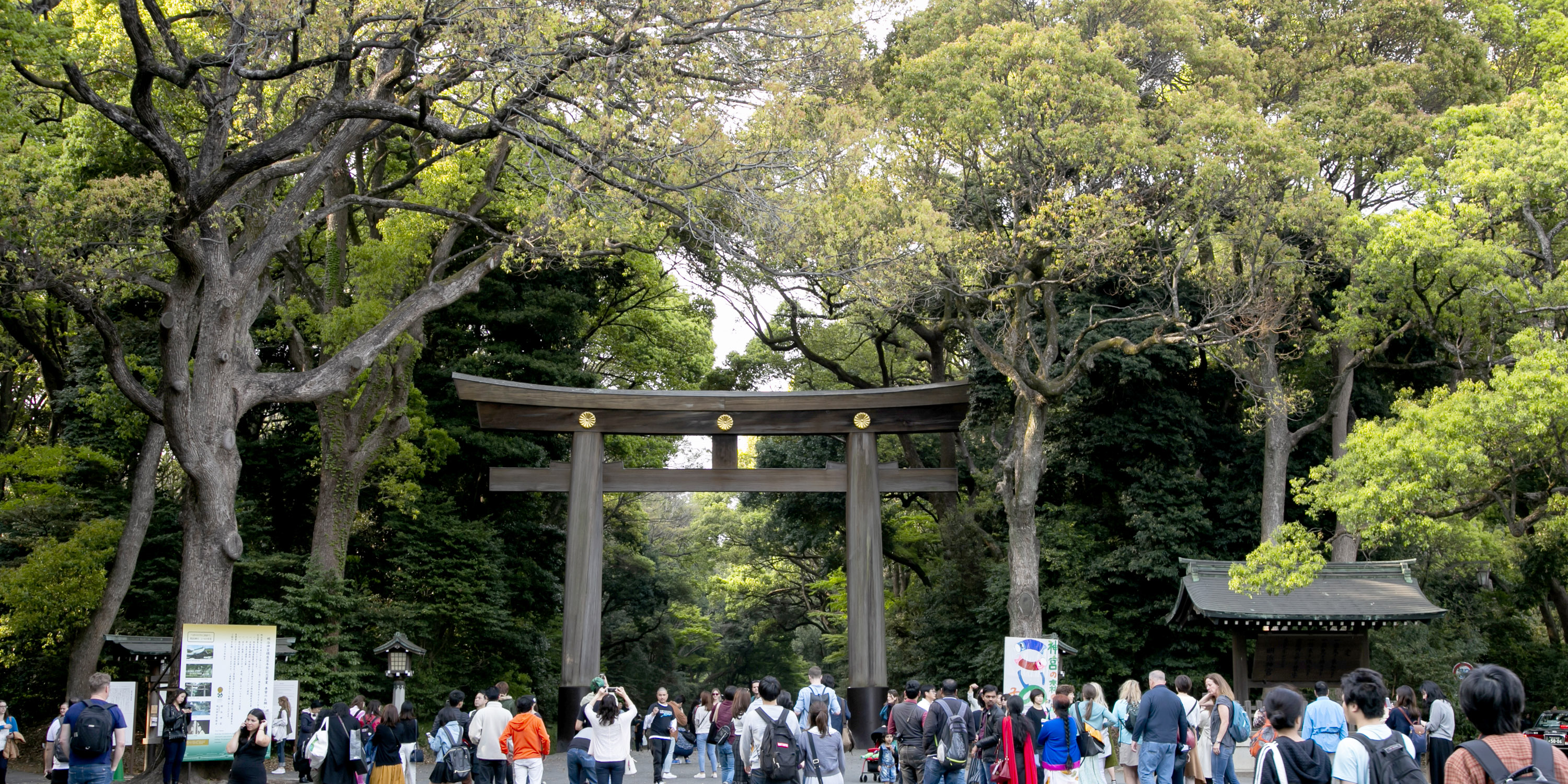 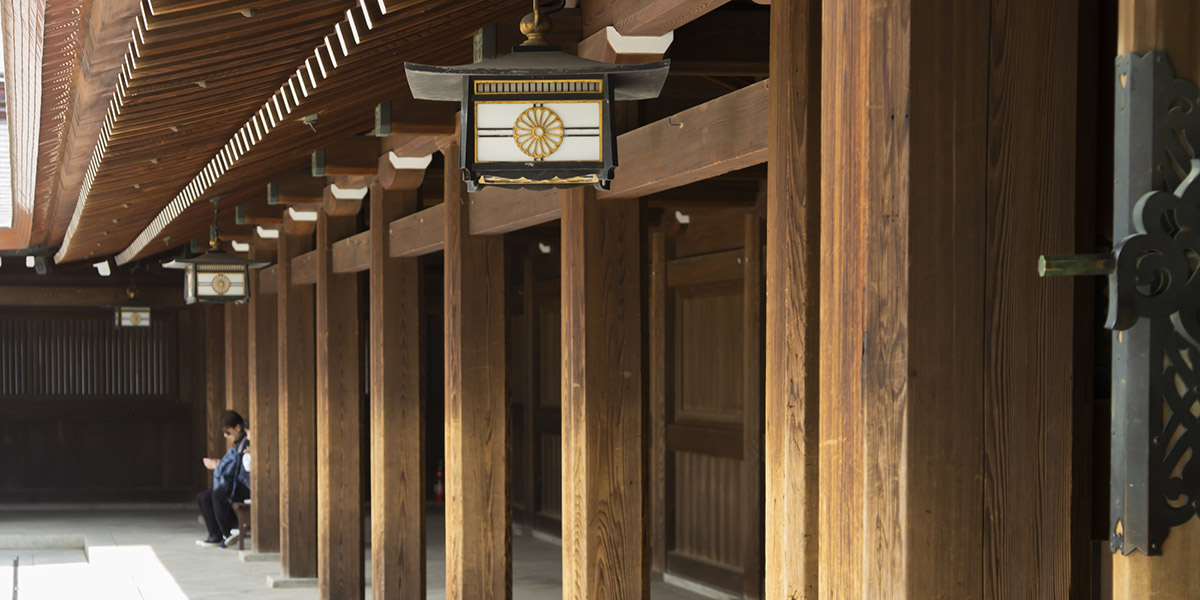 Meiji Shrine is dedicated to the deified spirits of Emperor Meiji and Empress Shoken, and is made up of the solemn inner gardens, the outer gardens which hold the Meiji Memorial Picture Gallery, and the Meiji Kinnenkan.

The dense forest that surround the shrine was planted by hand with around one hundred thousand trees brought from across Japan. It covers an area of 700,000 sq. meters, and has grown into a rich and luxuriant forest, much loved by the people of Japan.

Before Meiji Shrine was constructed, the land it lies on belonged to the imperial household. With the exception of the current imperial gardens, the land was mostly fields, and would have made a barren landscape.

Work on the Meiji Jingu Forest began in 1915 – a grand plan to create an “eternal forest”. Messages came from across the country that people wished to donate trees, from Sakhalin in the north and Taiwan in the south. And from beyond Japan, trees arrived from Manchuria in northern China, and Korea. More than 110,000 youths helped to plant them, and so a forest was born in the heart of Yoyogi. 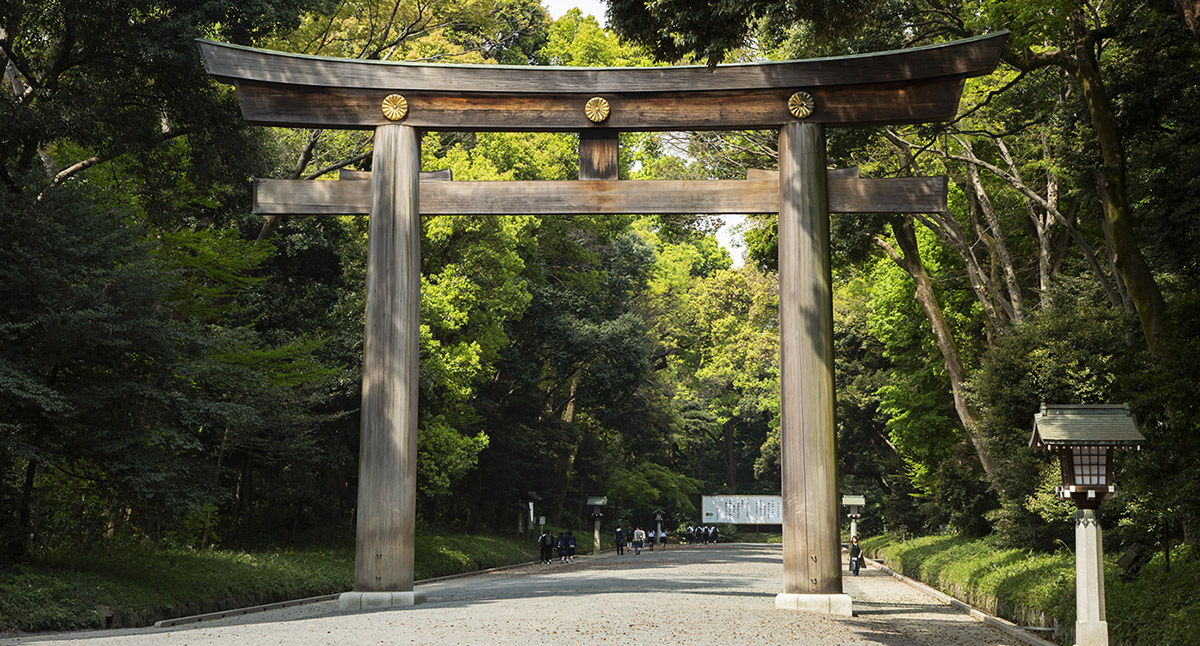 Meiji Shrine has eight torii gates. A torii symbolizes the place where the gods come down from above, the separation line between our world and theirs. It is good manners to quietly calm your breathing and bow briefly before going through the torii. Once you have passed through you are on sacred ground, and your worship has begun.

The Second Torii, the largest in Japan 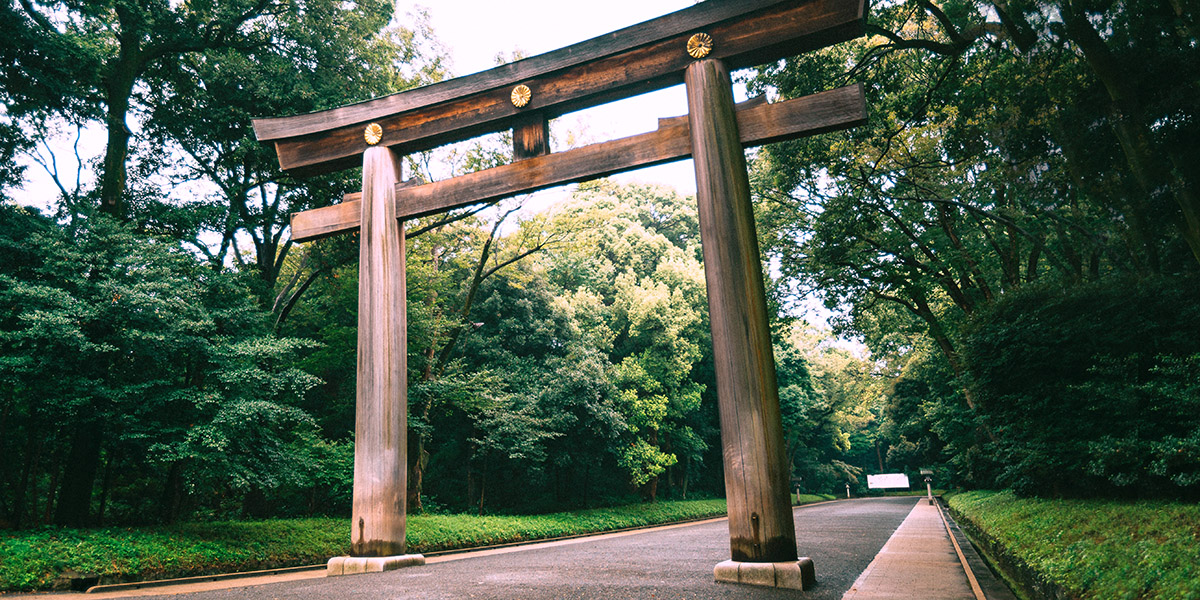 The Second Torii, which stands where the South Approach and North Approach meet, is the largest wooden torii gate in Japan. The posts, which have a diameter of 1.2 meters, stand 12 meters tall, and weigh 13 tons, were made from a giant tree more than 1500 years old. 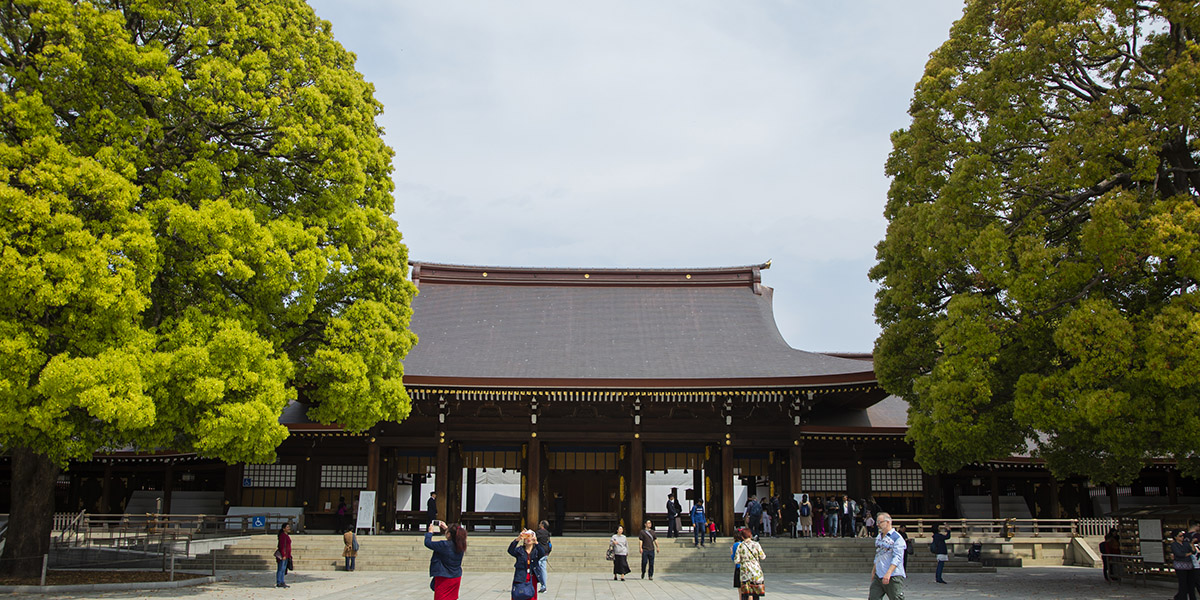 Once you have passed through the third torii, and the Minami Jinmon Gate, you enter the Main Shrine, with the Honden where the gods are enshirined, the Haiden (inner and outer) for offering prayers, covered galleries and more.

The Meotogusu on the left side before you enter the Main Shrine is famous as a power spot. Two camphor trees, planted in 1920 when the shrine was being built, are connected with a sacred rope, and it is a prayer place for those looking for a companion, and for lovers and married couples wishing to strengthen their relationships. 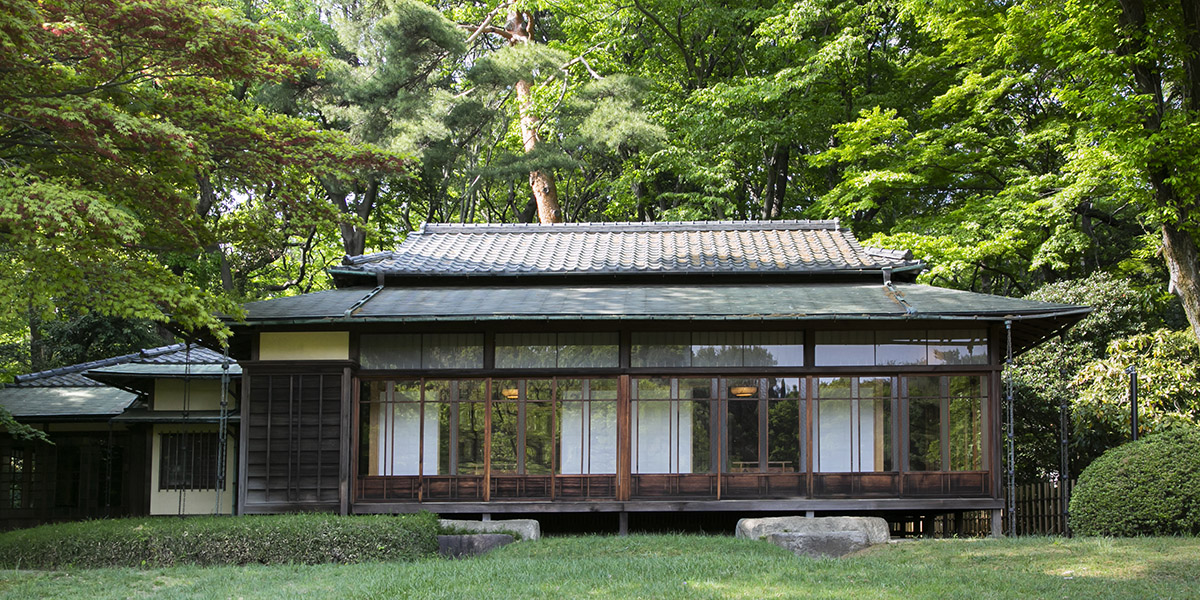 The wooden tea ceremony house Kakuuntei was built for Empress Shoken according to Emperor Meiji’s wishes. The original building was destroyed by fire, and reconstructed in 1958. 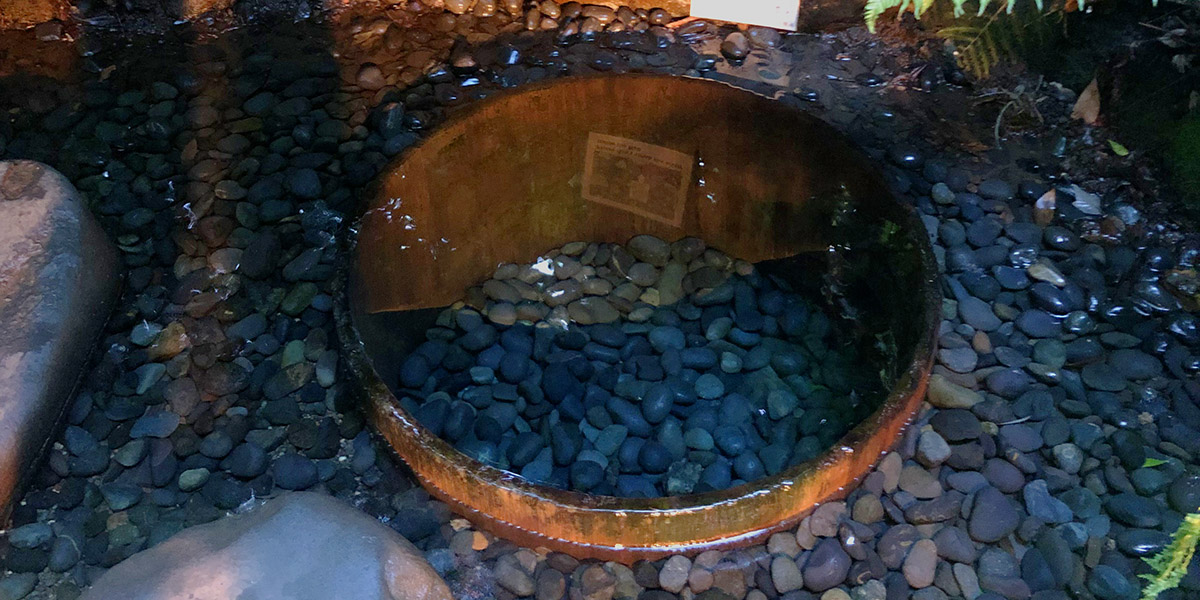 Legend has it that Kiyomasa’s Well was dug by Lord Kiyomasa Kato himself. It is well known as a power spot within Meiji Shrine. The water maintains a temperature of close to 15 degrees year round, and is said to spring from the ground at a rate of 60 liters/second.